Are you a healthcare facility located in the Los Angeles area looking for a better, simpler laundry program? Then ImageFIRST’s medical linen and laundry complete services are for you!

Outpatient offices, healthcare systems, surgery centers, hospitals, and other facilities throughout southern California have found that unburdening their staff from linen management allows them to prioritize patient needs.

ImageFIRST focuses exclusively on linen and laundry services for the medical industry, including:

Laundry and delivery services throughout Los Angeles and the greater California This includes proactive inventory management for cost control, starting with a level of clean linen supplies you need.

An infection prevention process for our laundering processes that exceeds industry standards.

A dedicated Los Angeles-based Customer Advocate as the primary contact point to assist your scheduled and unscheduled needs, and 24/7 access to service support via a free phone app.

We provide comprehensive medical linen and apparel rental and laundry programs to the entire Los Angeles region. We also service adjacent cities and areas including all the way up from Santa Barbara down to Los Angeles County, Orange County, San Bernardino County, and Riverside County all the way down to San Diego.

Enter your zip code below to connect with your local ImageFIRST partner.

Want to learn how your facility near Los Angeles can benefit from ImageFIRST’s fully managed linen and laundry services? Get a free estimate now.

We provide comprehensive medical linen and apparel rental and laundry programs to the entire Los Angeles region. We also service adjacent cities and areas including all the way up from Santa Barbara down to Los Angeles County, Orange County, San Bernardino County, and Riverside County all the way down to San Diego.

Enter your zip code below to connect with your local ImageFIRST partner.

Our fully-managed programs include rental and laundering of quality linen, including:

Ready to Get Started? Select Your Products Now

Areas Served in California by Our Los Angeles Location

If you are a medical facility looking for more than a linen rental and laundry services provider in the Los Angeles region, then consider ImageFIRST. With over 50 years of experience, a sole focus on the healthcare industry, and a reputation as industry leaders, ImageFIRST is the best local choice. We understand and work to support your number one goal: providing quality, compassionate care to those in need.

We service any outpatient facilities, hospitals, surgery centers, and outpatient departments in and between these major regions:

If you're looking for quality, courtesy and that perfect look to your linen and scrubs, then look no further than ImageFIRST. After a few other companies, we finally made the switch to ImageFIRST, who came in with the best market pricing, quality of linen, cost analysis and inventory tracking that has made our surgery center and clinic look top notch. Let’s not forget to mention their great customer service; what more could you ask for?

Your patients’ satisfaction is based on their experience. That starts with the gown they put on before even receiving care from their caregiver. A quality, comfortable gown can provide a patient with a sense of calm and security. The experience then continues with clean linens, the look of fresh scrubs on a nurse, and the understanding that every detail is closely monitored right down to the pillowcases.

Whether you want a patient gown program or scrub and lab coat services, we’ve got you covered. Our remarkable laundry services relieve your staff from linen management so they can focus on what really matters: their patients.

Your ImageFIRST team, located in Los Angeles, understands the needs of your facility. Get the benefits of a local partner backed by the power of a national provider.

Being a leader in the United States laundry service industry comes with the responsibility of connecting, supporting and positively impacting the local communities we serve. Since 2005, two ImageFIRST Los Angeles plants opened.

The plant in southern Los Angeles has worked to expand its presence throughout the community. Under the guidance of ImageFIRST Los Angeles’s General Manager Tony Acevedo, this commitment drives every interaction we have with our own team, as well as the healthcare companies with which we partner, and the patients they help every day.

General Manager Tony as built a dedicated team of caring people interesting in creating a positive work environment throughout California. This has led to fruitful relationships among coworkers and clients, and ImageFIRST Los Angeles prides itself on being one of the most diversified customer bases in the company, with a strong presence in many universities in southern California.

The Golden State team has become like a family amongst the associates and their clients. They also try to give back to their local community as much as possible by participating in different charitable events every month, including working with groups like the Ronald McDonald House, Su Casa – Ending Domestic Violence, LA Food Bank, and the annual Alzheimer’s Walk.

Under the leadership of Bob Singer, the plant in northern Los Angeles has also built a wonderful team since it opened in June 2005. Besides servicing surgery centers and healthcare facilities throughout the region, the associates have also brought our Purpose to life through a variety of community giving events throughout the year. Over the years, the Los Angeles team has donated blankets and towels to homeless shelters or animal shelters as well as to a women’s shelter. 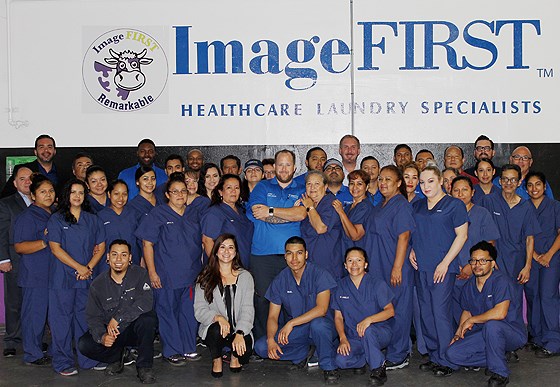 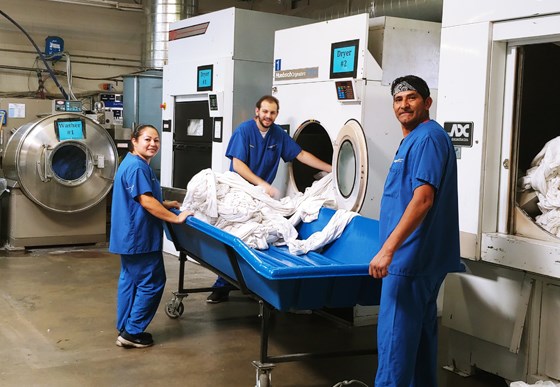 The ImageFIRST Los Angeles offices and plants are located at the following addresses:

For a no-obligation cost estimate on remarkable healthcare linen rental and laundry programs and services in Los Angeles and the greater California area, please contact us at 800-932-7472 or fill out the form below:

Looking for Healthcare or Hospital Linen Services in a Different Region?

Not in the Los Angeles region? Founded in 1967, ImageFIRST is the largest and fastest growing national healthcare laundry provider serving outpatient facilities, health systems, and hospitals. Our 41 locations and growing serve more than 14,000 medical facilities across the country every week. We service all major markets in the continental United States. Simply enter your zip code to connect with an ImageFIRST partner in your area.